Following up on last week's Apple/Amazon pair trade idea using the Ponzo forecasts here are the latest updates.  Also included is an APPL chart with an AMZN overlay. Technical indicators are 10,20,50 SMAs and parabolics.  The entire tech sector looks ripe for a dead cat bounce ( in progress) followed by a trap door down to longer term support levels.
Over the last week APPL/AMZN have traded in tandem, both up and down  Wait for the divergence. 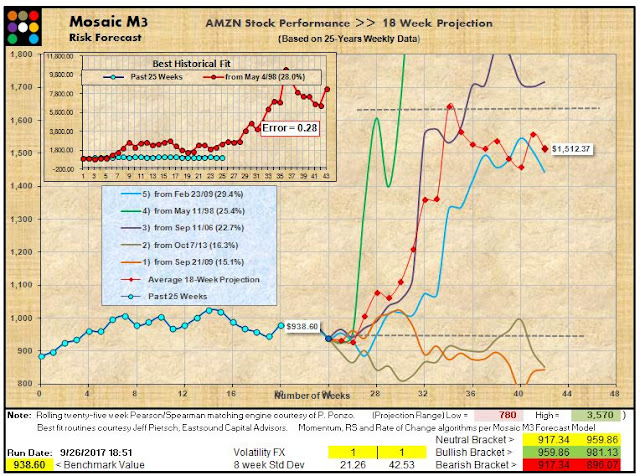 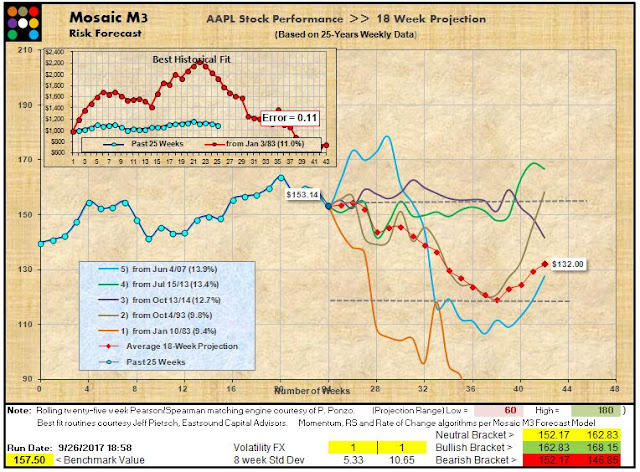 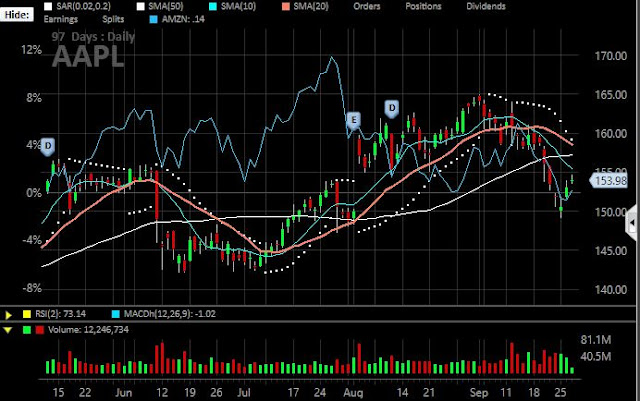 chart courtesy of Schwab SSEdge
Posted by bzbtrader at 8:48 AM

This week's Ponzo forecasts are little changed from last week.  SPY moved only a few pennies from last week and the Qs dropped $2 but the forecasts remain essentially unchanged although the longer term QQQ projected highs have declined a few dollars.  TLT remains a study in channel consolidation and still looks like a great butterfly/iron condor candidate although with the VIX in the 9s the premium payoffs are at historical lows.
The weekly Trader's Outlook is mildly bearish now that earnings season is mostly complete and traders are girding their loins for October's anticipated volatility surge and more potential threats from NOKO, and now Iran..
We'll review the Apple/Amazon ponzo charts on Wednesday. 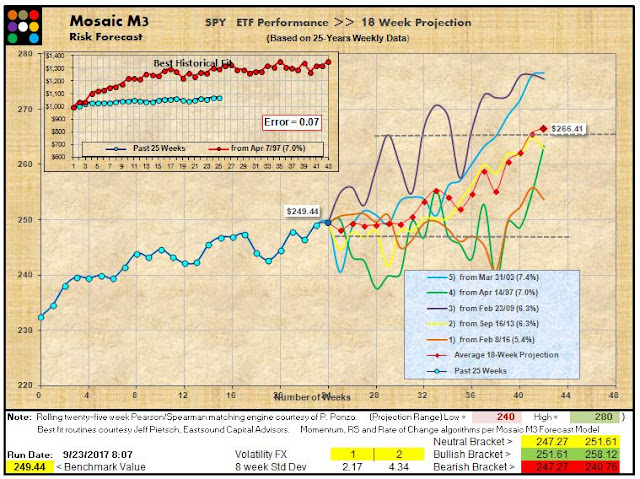 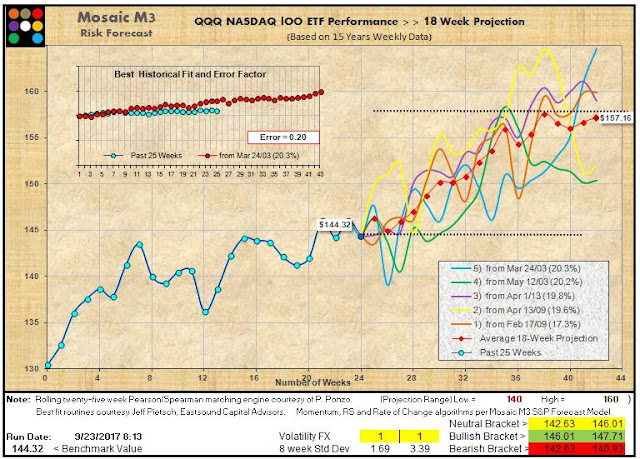 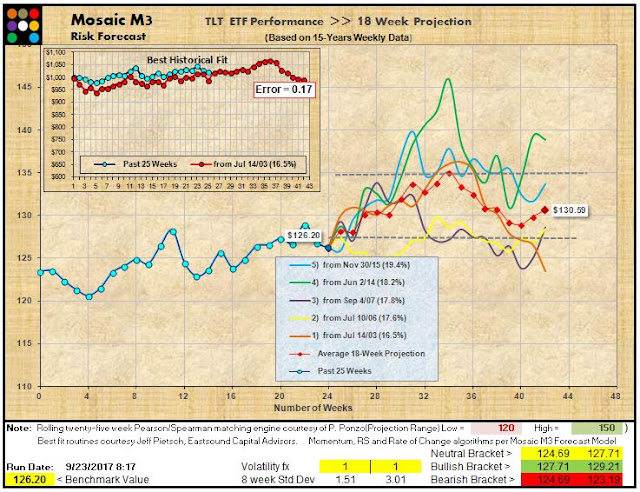 Posted by bzbtrader at 8:32 AM

With today's swoon in AAPL we may be looking at a longer term trend in the making.
At the same time AMZN looks poised to jump forward in the aftermath of Harvey, Maria et al...and we're not done yet with hurricane season.
Assuming no NOKO nukes or other apocalyptic scenarios these are the risk forecasts for APPL and AMZN as of Monday.  So far the Apple is playing out according to forecast.
Current odds favor a Long AMZN, short AAPL pair trade.
For those unfamiliar with the PONZO models, check here. 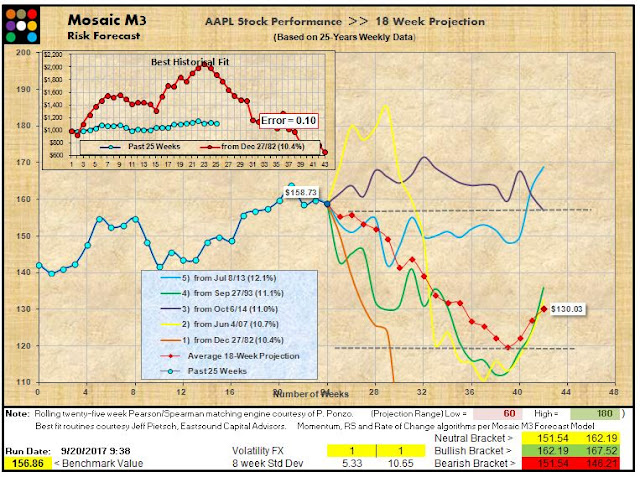 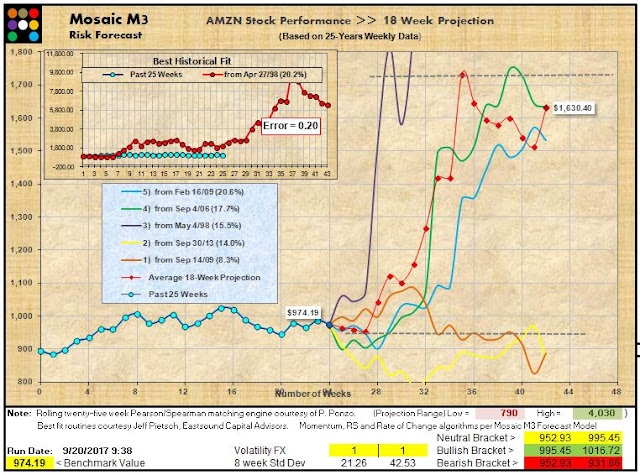 Posted by bzbtrader at 9:42 AM

Forecasts are looking bullish...in fact wildly so for both SPY and QQQ, while TLT has hunkered down back into the sweet spot of our longer term buying channel (butterflies and iron condors).
VIX (not shown) has once again settled back into the 10s and the bulk of current premiums reflect a miserable risk/reward ratio.
If you believe the markets are uber overbought at this point just wait a few months for a truly frothy top that exceeds virtually all expectations from top market gurus at the beginning of 2017.
Trader's Outlook is optimistically bullish.
Hey!  What could go wrong? 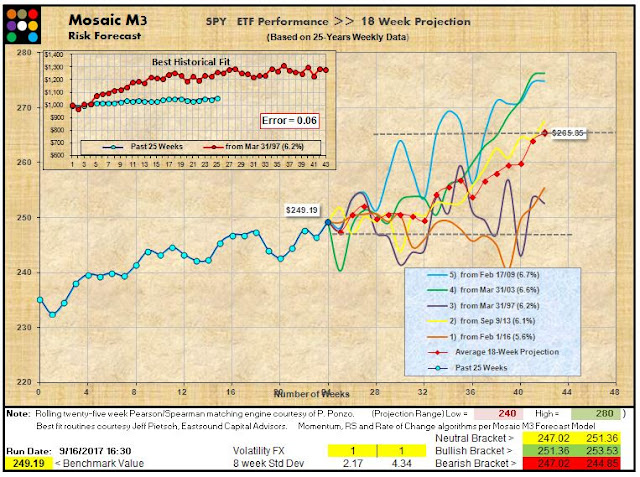 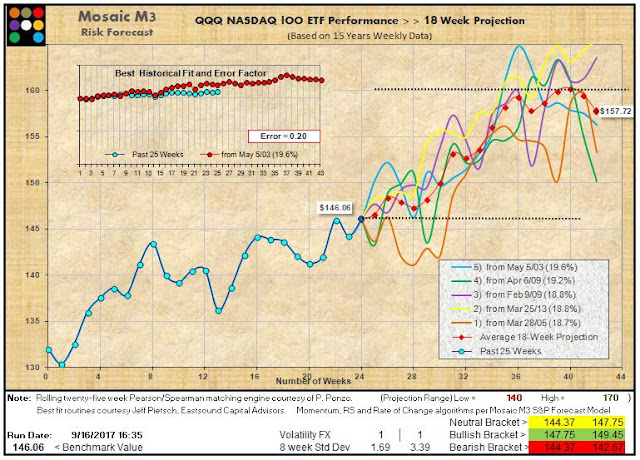 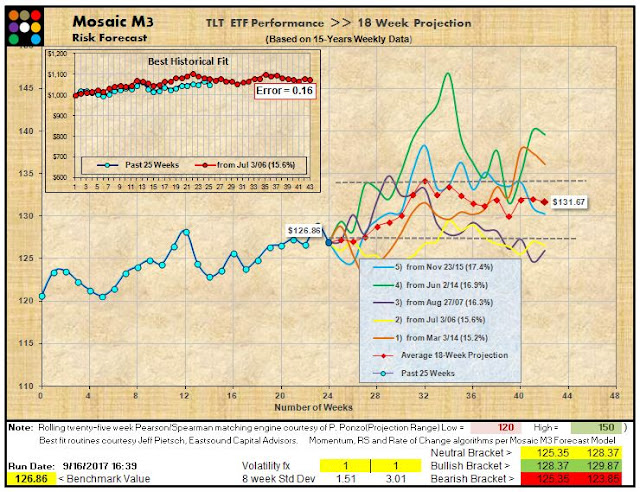 Posted by bzbtrader at 4:56 PM

The new Ponzo forecasts for SPY and QQQ are trending into a neutral mode while TLT is once again pushing into overhead resistance ahead of a possible breakout......meaning that our hopeful scenario shown last week of a pullback to the mid linear regression channel remains unfilled and we are unvested in TLT at this time.
The effects of Harvey and Irma remain to be seen but with the level of devastation already evident in Houston and the rest of the Texas gulf coast mass destruction of  the Miami environs could mean years of recovery ahead for both regions.
A 15 foot storm surge (up to 20' projected) will put the Everglades underwater releasing all those hungey gators and some 150,000 (est.) pythons into the waterways. That's a scary thought.
Meanwhile, the NOKO situation is not improving and the likely effect will be increased volatility as the uncertainty factors rise.
Trader's Outlook is short term neutral to bearish for the coming weak based on a modest deterioration in the technical indicators coupled with concerns for tax reform and weakening economic reports.. 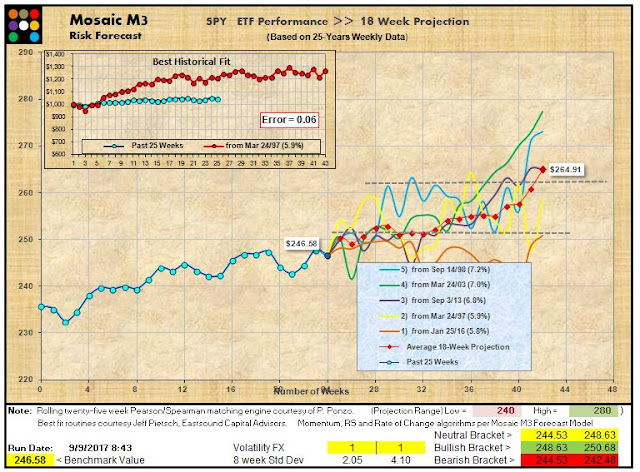 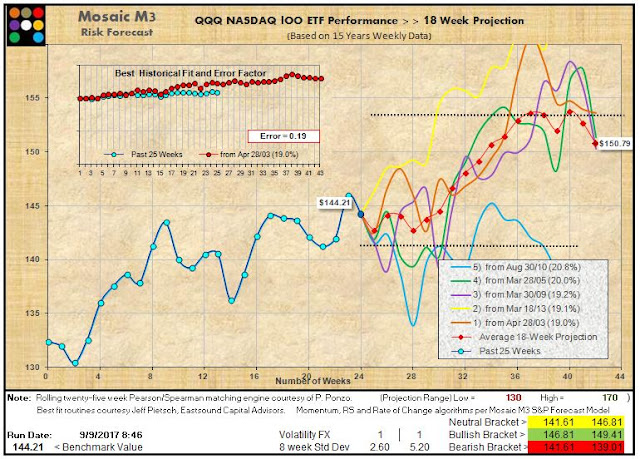 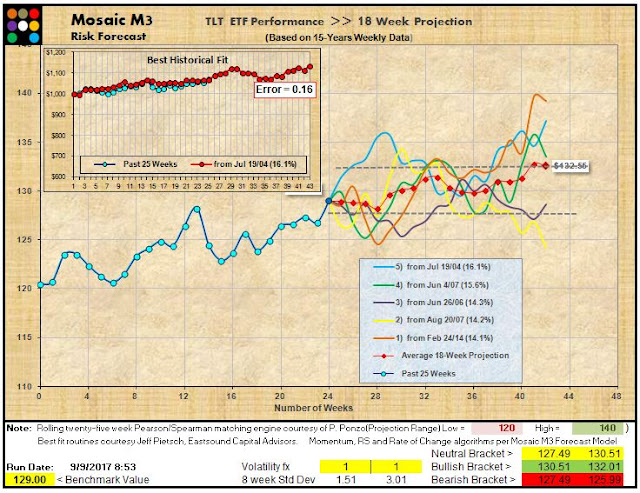 Posted by bzbtrader at 4:14 PM

New Ponzo forecasts continue uber bullish themes for SPY and QQQ while TLT remains in a relatively delta neutral longer term linear regression channel (see below) with butterflies and/or iron condors high odds options setups (when TLT gets back to mid channel).
As the talking heads continue to predict market Armageddon by mid October and a risk on strategy looks fraught with danger the market maintains a slow, low volume, bullish churn.
Volatility is pulling back (once again) leaving it difficult to find even modest premium payoff situations.  Compounding this frustration is the rise of new algorithmic trading firms that account for more and more of daily market volume while confounding traditional technical analysis indicators.   After over 30 years of trading I'm finding the current markets difficult to decipher and, more importantly, difficult to find a tradeable edge.
For my own risk tolerance a delta neutral approach provides the most comfort (I like TLT).
Trader's Outlook is once again bullish. 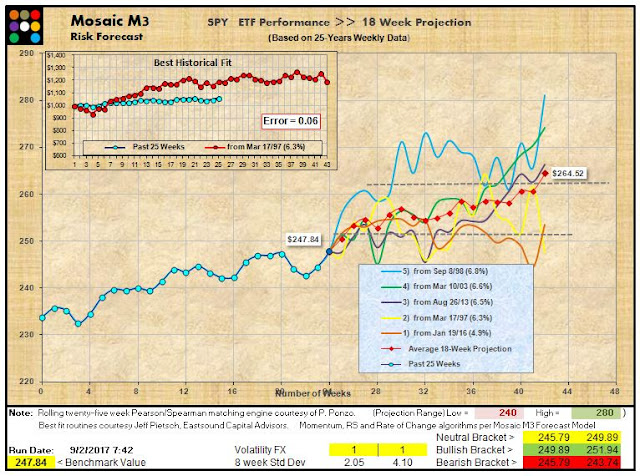 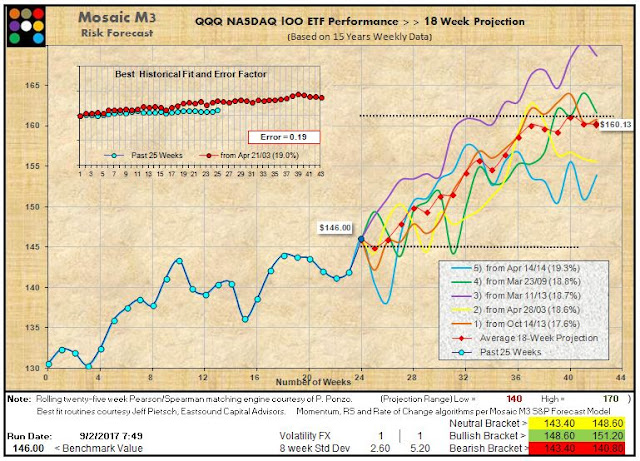 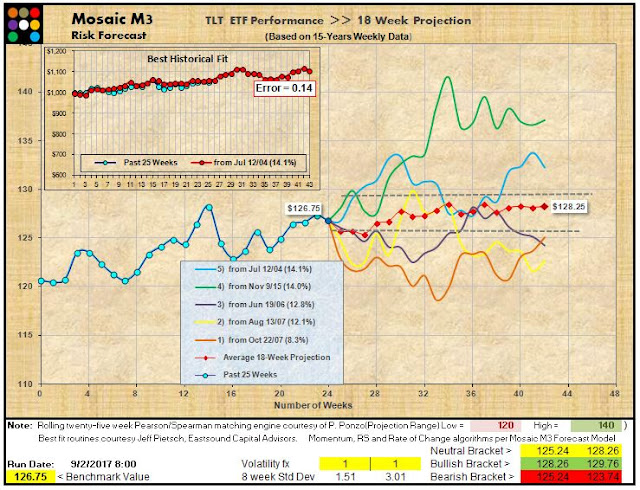 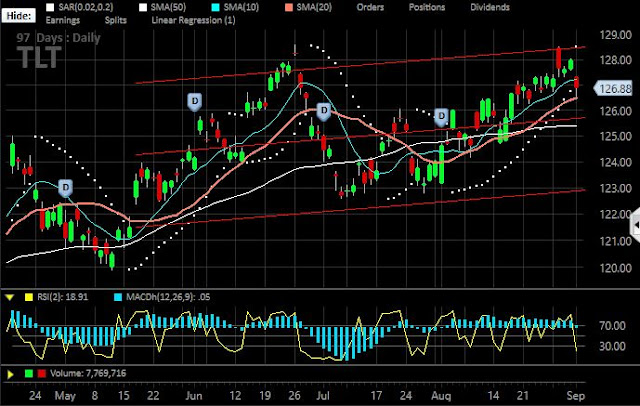 Posted by bzbtrader at 5:49 PM