No change in our VXX signal as the market tries to gauge its next move. 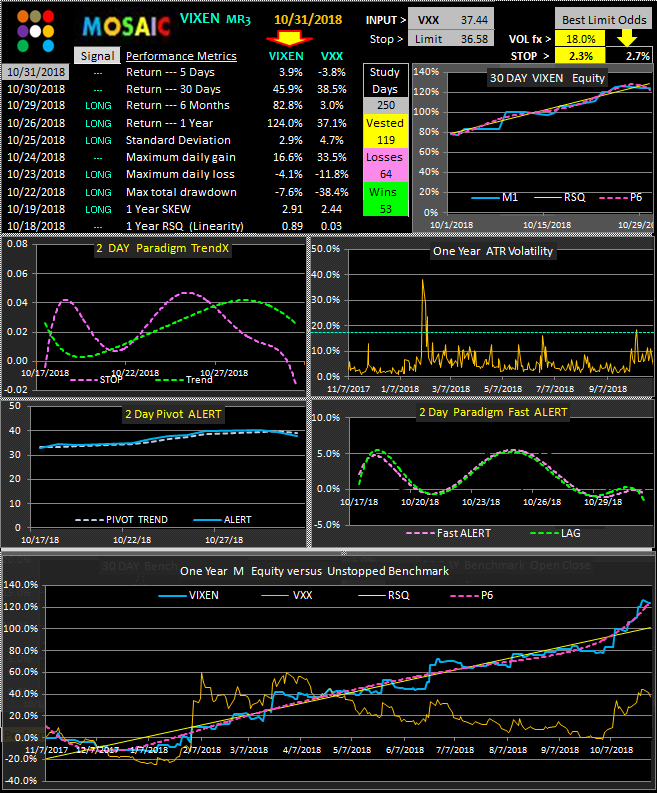 Posted by bzbtrader at 6:31 PM

Our skeptical view of yesterday's closing long signal for VXX signal was justified as the markets, rose, dove and then climbed slowly and steadily into the close. We closed our long VXX for a modest .5% loss in the morning session after it looked like momentum buying was kicking in.  Those that played by the rules got stopped out for a 2.3% loss later in the day but avoided the greater than 3% loss incurred by the buy and holders. 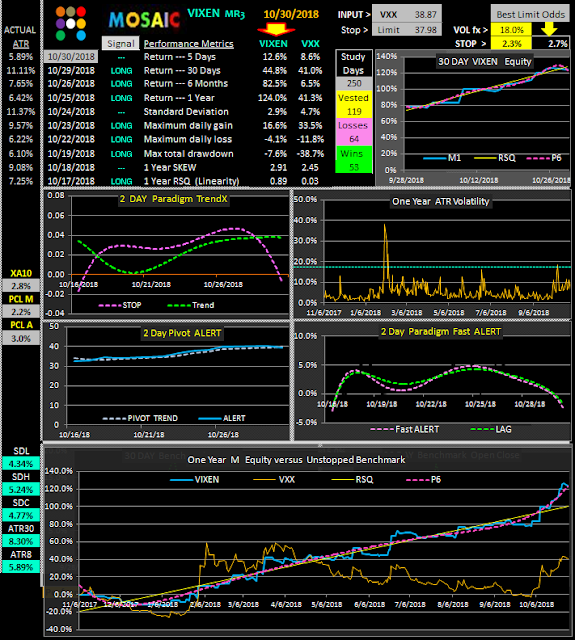 Posted by bzbtrader at 6:11 PM

Looked like the bulls were going to run the day at the open but then sellers showed up and drove the us down to S1 as tech led the way down with AMAZON down 130 in the afternoon session before a modest rally into the close.  Volume was moderate and whether we have a Turnaround Tuesday remains to be seen.  After this recent bearish run I'm looking for some kind of relief rally so we're ready to bail on sudden green reversals. 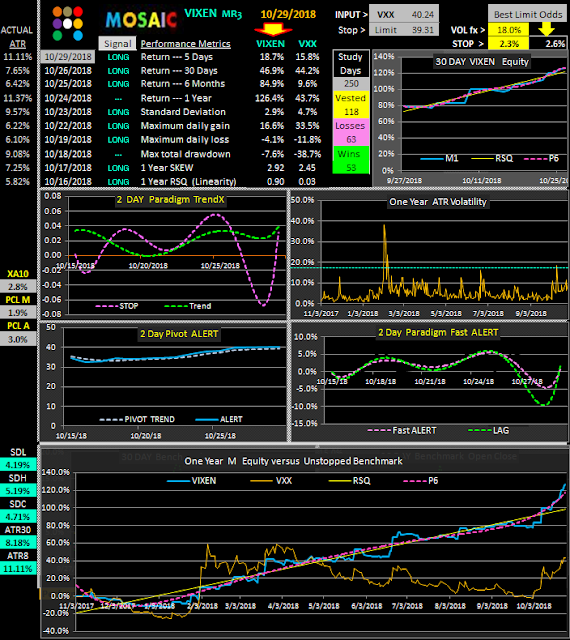 Posted by bzbtrader at 1:22 PM

Another 6% pop in VXX today is pushing our performance metrics to new highs.  So far we;ve stayed on the rihgt side of the VXX trade even as we see dramatic intraday swings.  VXX is actually down 1.5% in after hours trading but Monday could be a washout with a pullback to recent lows and then some. Our signal is still long but, as noted yesterday it's getting into uncharted territory from a technical standpoint so anything could happen.
I've also posted a recent performance report on our flagship delta neutral model using the QLD and QID, (2x long and 2x short the QQQs). (see below). This is still a reliable money maker with very low risk...if you follow the limit stop and trailing top rules. 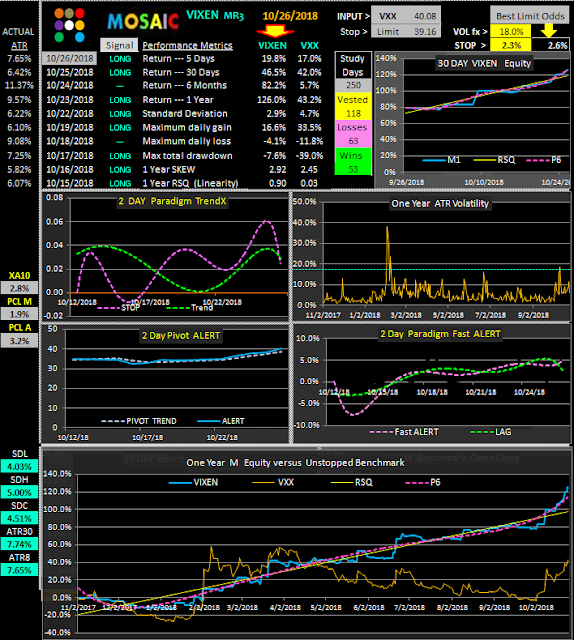 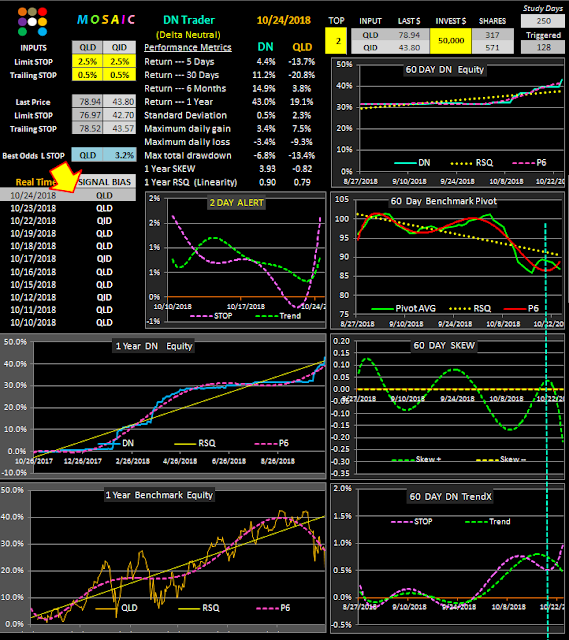 Posted by bzbtrader at 3:41 PM

Total option market weirdness today as both VIX and VXX fell significantly and yet the entire put option chain for mid November declined...no green numbers....so once again the option market makers rake it in at the expense of direction traders.
For Thursday the VIXEN outlook for VXX is positive and so the signal is vested.  The after hours markets are following suit as both AMAZON and GOOGLE are red based on poor earnings.
Also below is the daily trend line for VXX and its clear that today's pullback was dead on the resistance line we saw in July.
This doesn't mean the equity markets are poised for further gains as today's action may have been driven by short squeeze action and a more reasonable exhaustion level for the VIX is in the 50's, not the 30's.
Friday will be REALLY interesting if the markets retrace tomorrow 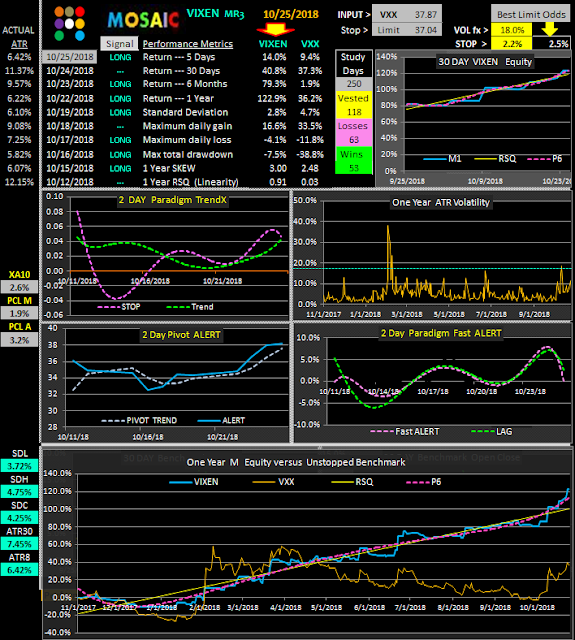 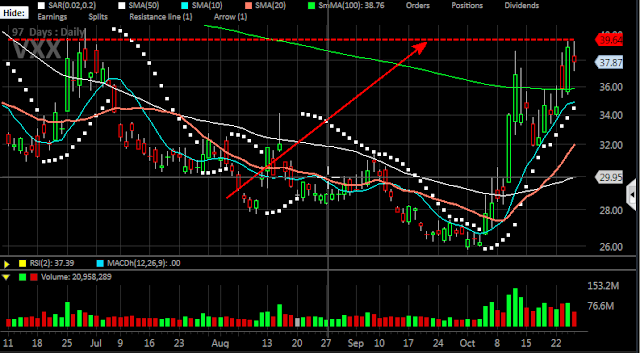 Posted by bzbtrader at 6:52 PM

Another handsome gain for our long VXX position today as SPY dropped 850 points into the close as the buy-the-dip crowd stayed on the sidelines. For Thursday the VIXEN signal is in cash and we closed our long VXX today at 15 minutes per close...abiding with our standard buy/sell time frame.
Point in fact ...the latest VXX run via the VIXEN has had a certain element of luck to help it out.
And, yesterday's decision to bail when the SPY was at -600 and then buy back in the late after market was a strictly discretionary move off the rules based VIXEN setup, but it netted us an additional 8% above the posted metrics and sometimes you just need to execute those risk off trades when your brain screams..."Time to buy or sell".
Keep in mind that our prime concern is risk management and the success of the VIXEN model becomes most apparent when we examine the max total drawdown of VIXEN versus an unstopped buy and hold VXX position.....7.5 versus 39%, 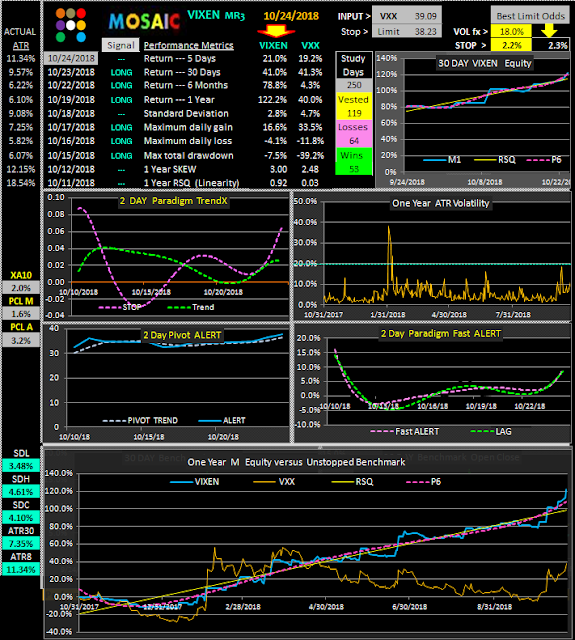 Posted by bzbtrader at 2:27 PM

The market tanked in the early session and we sold out our VXX  longs when SPY hit -600 or S3 on the pivots. Based on the closing signal, which is still long VXX, we re-entered a long VXX position at the close of after hours trading since the markets were we recovering into the close and in the after hours session. VXX was down 1.7% after hours so our re-entry strategy saved a few risk dollars by waiting until 4:45 PST.
I've also attached the current silver trades using the silver proxy ETF SLV.  Note that there returns are over a 6 month period only. This is the Z-score based pairs trading model much discussed in previous posts over the past few years.  I have modified it to only track a single input using the Z-score algorithms rather than a long/short pair strategy. 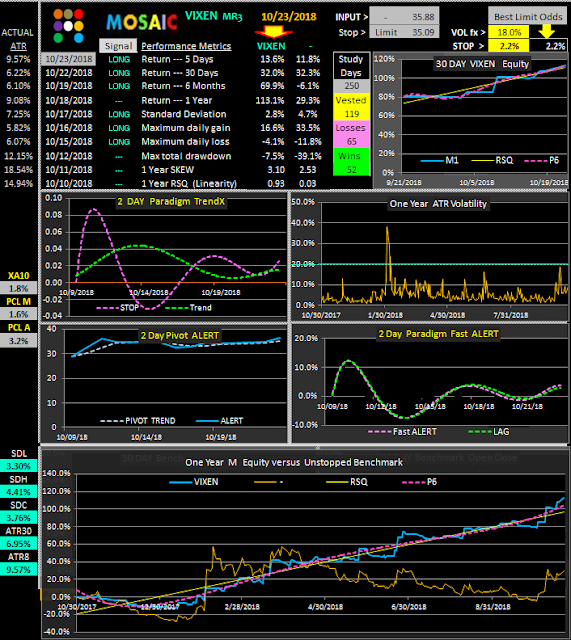 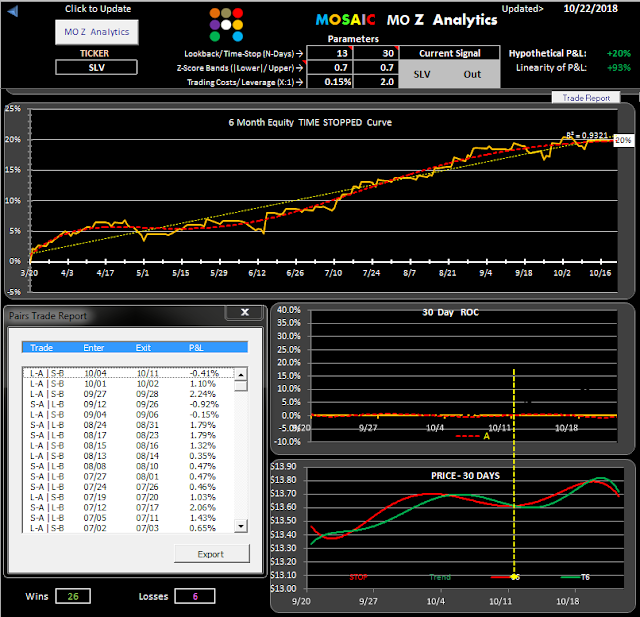 Posted by bzbtrader at 7:05 PM

Our long VXX signal captured a nice 1/5% gain at the close while in after hours trading VXX was up another .75%.  A number of significant technical breakdowns are apparent across multiple sectors and the current odds favor more near term consolidated downside action  Expect another major short covering rally but beware the subsequent Trap Door setup that's likely to follow.
For now the volatility signals are proving more reliable than the equity signals so that's where our dollars are currently deployed....along with a sizable risk on position in silver (SLV).....with current signal metrics to be posted later this week as time permits.
A reasonable trader looking at the VXX win/loss ratio would likely say..."Well. that looks terrible"
However, the magic of this trading model is hidden in the strict adherence to the specified limit stop and the willingness to accept limited losses while also accepting big winners.
The linearity of the equity curve of the Vixen versus VXX  tells the real story.
Keep in mind that out of 250 trading days (1 year) the model was only vested 119 days, slightly less than 50% of the time.
Also keep in mind that VXX has a built in decay function due to it futures composition so betting on any long VXX position is akin to paddling upstream. That's not an excuse for the win/loss ratio, just a extenuating factor that further muddies the water when trying to trade VXX. 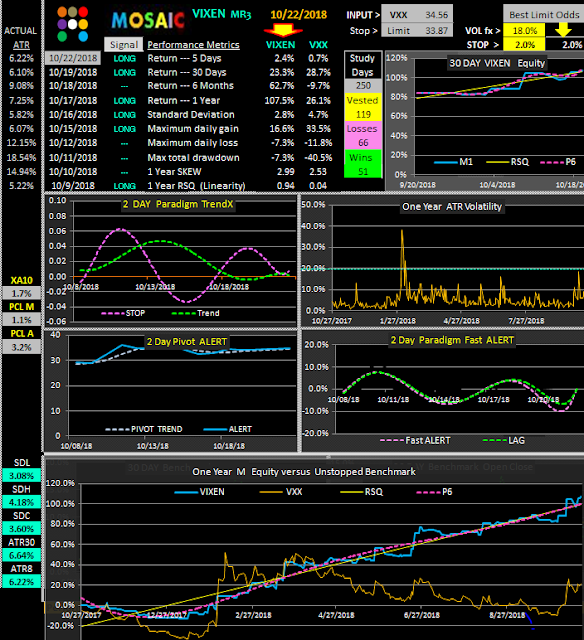 Posted by bzbtrader at 7:11 PM

Finally back in the saddle after some extended medical issues.
For the short term we'll just focus on the trading odds for QLD (X2 QQQ ultra ETF) and VXX (VIX derived proxy ETN).
The current market environment is marked by high volatility, large intraday swings and a tendency to reverse midday.  Technical indicators are finding traction difficult.
This VXX study is based on our flagship VIXEN mean reversion model which is based solely on volatility metrics and ignores pricing structure completely.
Our VXX signals can be implemented with actual purchase of the underlying VXX instrument or by employing a variety of option strategies to gain leverage.
The posted metrics are based on purchase/sale of the underlying ETN.
Keep in mind these are daily signals to be executed at the close or in the afterhours trading session (not possible with options).
For Monday the VXX signal is long (bearish for the market) with a 2.2% limit stop. 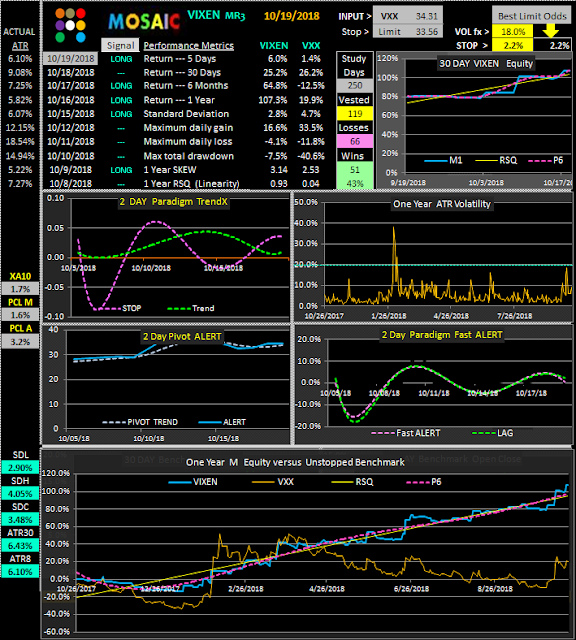 Posted by bzbtrader at 7:24 PM